The Department has struggled to maintain control within Chester's Mill due to inexperienced leadership after the demise of Sheriff Perkins, the manipulation of Second Councilman 'Big Jim'Rennie and lack of proper officers to maintain the peace.

Sheriff Duke Perkins was against the suggestion by Second Councilman 'Big Jim' Rennie that Councilman have the power to authorize additional police officers during emergencies and claimed "The last thing this mess needs is amatures with badges". And Duke states till he hears from the Mayor or above, 'Big Jim' is not authorising anything.

Yet with the death of Sheriff Perkins and Deputy's Denton and Randolph, newly promoted Sheriff, Linda Esquivel is forced to hire replacement Deputies from those inside the Dome.

With the death of Sheriff Perkins, Deputy Randolph begins to panic which eventually led to him opening fire with his pistol at the Dome. The bullet ricocheted and ended up hitting Deputy Denton, killing him instantly. When Randolph escaped police custody, he was eventually shot and killed by Deputy Esquivel.

The structure of the Sheriff's Department on the day the Dome came down was:

The series starts with the Department already being understaffed due to half of the department being trapped outside the Dome. Sheriff Howard 'Duke' Perkins is a confident and able Sheriff of the Town who is shown to do whatever's necessary to protect the Town of Chester's Mill. When the Dome comes down, Sheriff Perkins is informed by Deputy's Denton and Randoplh of downed power lines by the Clinic and Food Mart. Sheriff Perkins and Deputy Linda Esquivel then become the first responders inside the Dome to investigate the 'Plane crash'.

Upon arrival, Perkins is cautious of the 'Dome' and urges Deputy Esquivel to step away as he then begins to organise the operation of shutting down all the roads leading outside the Town.

Stub section. Expand it by clicking Edit to right of the section title.

Stub section. Expand it by clicking Edit to right of the section title.

The Sheriff's Department has a wide arsenal of weapons available to them when the Dome comes down. Riot Gear was sent to the department by the Federal Buearu of Investigation after the 9/11 attacks. This included Tear Gas which has since lost it's effectiveness. 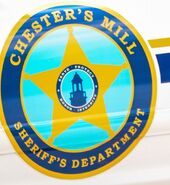